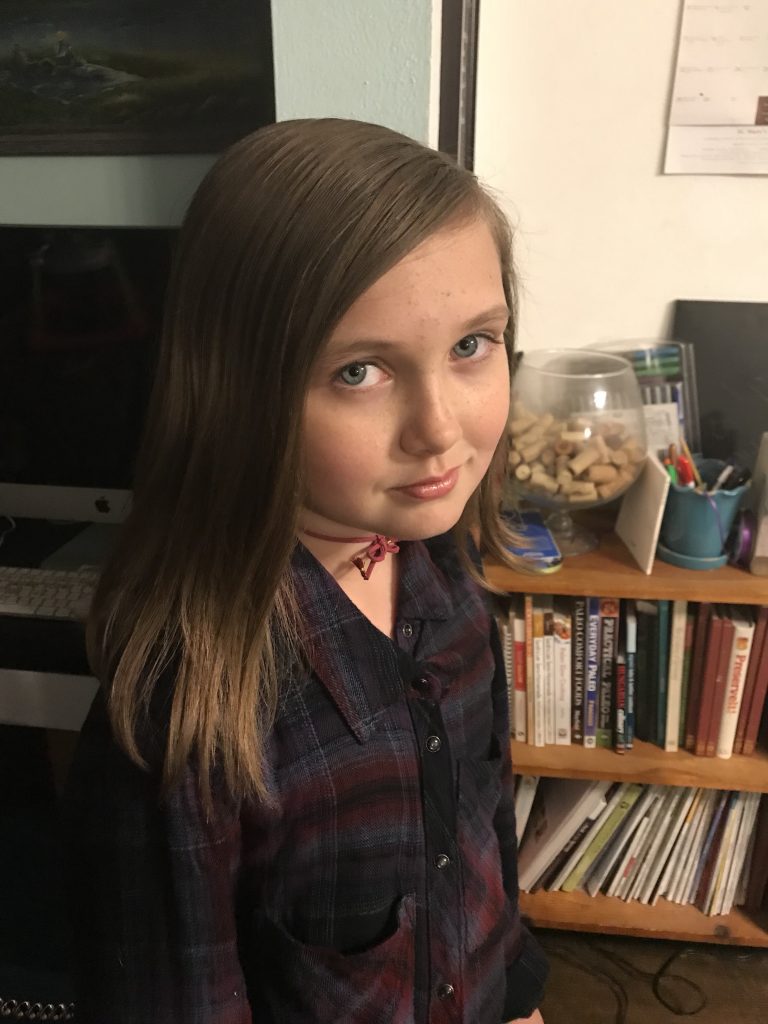 By the time I had A, I knew which rules of my childhood I would want to keep for her. One that somewhat made sense and continues to… makeup. I wasn’t allowed to wear it until I was 13 and then lipstick and nail polish. Then, at 15, I was allowed all the other stuff.

We let A play with nail polish and pale lip glosses, wearing them out on special occasions. The plan has been to allow A a tinted cream, concealer and lipsticks/glosses at 13. Then, the full gamut at 15. I’ve always wanted her to understand how to use makeup to her advantage without the errors of my youth… who else thinks of their makeup choices and cringes? Blue eyeshadow.

A has been talking about her dark circles and bags under her eyes for about a year now. It started with her insisting we should buy hydration pouches for them. Off an on she’s commented about them bothering her. As the school year began it started becoming a bigger deal. I wondered how I could help and brought it up to her endocrinologist at her last appointment. It turns out that these bags are pretty common with hypothyroidism. Fun.

More fun, there isn’t much she could do in addition to what she’s currently doing. Get plenty of sleep, drink lots of water…

The problem remained that A was feeling uncomfortable in her skin.

Would anyone actually want to go back and redo middle school? Not me.

Without a bunch of options, Hubs and I made a pretty radical decision. One that many might disagree with, but I’m comfortable defending. We bought A concealer and a tinted moisturizer.

She’s 11, almost 12. It’s about a year earlier than I planned this. But here’s the deal… this isn’t much different than my mom letting me shave my legs starting at ten because I had DARK, THICK hair. It was embarrassing and as a preteen girl, no amount of beauty comes from within fixes that.

A is much paler than I am, than many of our friends are, than all of her aunts. Dark circles aren’t something any of us are familiar with, especially not at 11. Those circles, which sometimes look purple and have caused people to comment about her ‘not sleeping enough’, are not something she gets to control. Anymore than me having a mustache grow (seriously). Every morning this week, she has woken up, done her normal face wash and moisturizing routine. Then, she applies a dab of concealer and tinted moisturizer to even it all out. Then, she feels more confident.

My job as her mom is to help her navigate this world, to get her to adulthood as safely as possible. I would be a hypocrite if I told her that she should live with the things that make her feel uncomfortable about herself as I shave my beard. Instead, I tell her that I know I’m beautiful, a child of God. The same is true for her. I don’t think He’s going to care if she covers up those dark circles and feels better about what she’s presenting to the world as a result.

So, A now wears makeup. At eleven, she is wearing makeup. What she isn’t doing is shaving her legs, I asked about 6 months that she let me know if she was ready to (so that I could get her her own razor rather than her stealing her parents (which I tried to do). Her response was, ‘My hair is light, nobody notices it, so I’m good.’

As parents, we determine rites of passage only up to a point. Eleven years in, I feel like many of these are arbitrary. Because I didn’t magically become mature enough to date the morning I turned 16. And A doesn’t look like she’s 20 because of a tiny bit of makeup.

What are some parenting decisions that you are making that leave you a bit unsettled at first?