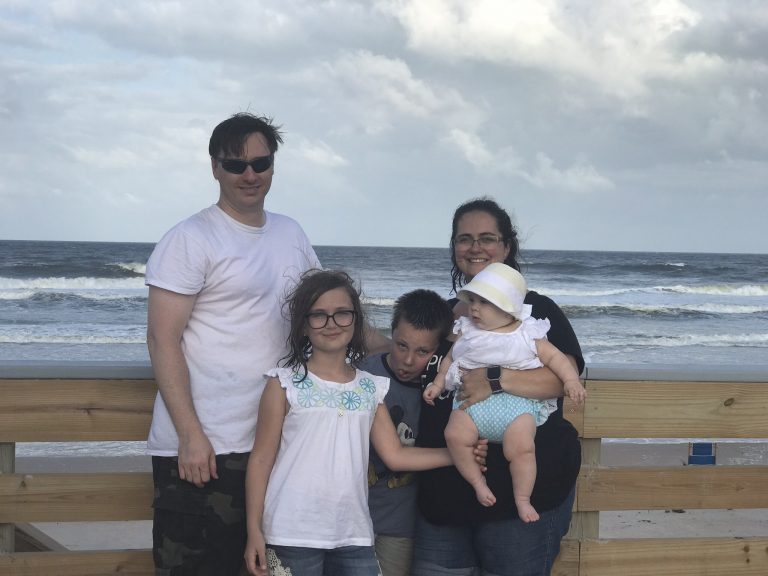 Hey all! I am actually going to do two posts about our most recent vacation (to Florida) so that I can cover everything. This first post will be the highlights and the second one (look for it this week) will be about the logistics.

and they were off!

C was sick the whole week leading up to our trip to Florida. She really hasn’t been sick before so I was a bit of a nervous momma. I knew what to do but she literally spent Tuesday night vomiting mucous and lethargic. We turned on the humidifier and she seemed to be on the mend. So, I tried to put my concerns to the side and focus on the whirlwind trip.

I am the Director of the Western region for my family’s business and they offered to pay for airfare so my husband and I to attend the 20th Anniversary party! So for the cost of tickets for A and E, we were able to fly out and spend three and a half days on the ground with my family. For me, it was important because I have been out West so long that I had not previously met several of the employees. I needed to establish relationships in person with these employees and a relaxed atmosphere of a luncheon was the perfect time to do that.

We woke up super early on a Friday morning with me having done 98% of the packing and asked hubs for one little thing, which I will get back to. Normally, when I fly with E, I notify the check in counter and the TSA agents that he has Autism. With that, they allow us to access the handicapped line and we avoid the often long and stressful (for him and subsequently for us) lines. Unfortunately, this was not the case this trip, our local airport (which I have used before) sent us through the regular line so E was exhausted. C did well on the first flight and then take off was okay on the second.

Landing in an airplane can be rough with anyone. But, I was rocking C back and forth with tears running down my face as we landed in Fort Lauderdale. It was terrible. It made me anxious about the return flight home the entire trip. C was miserable, I was miserable, A and E and so on and so forth. The crazy thing is… That entire time, I remembered promising myself that I would look for the positive and embrace the good.

Visiting with our families and bringing our children to places we grew up brought so much joy to us during a fairly rough trip. E had meltdowns, which we expected since he was outside of normal routines. C was sick the entire trip. A was fine, a preteen, with all the angst and drama that goes with that.

By far, our best day was Sunday. C had been up in the middle of the night with a temp but even so, when we woke up rather late we all headed out for an adventure. We had missed all the Mass times nearby, (I really love our Diocese and the options we have.) so we headed to a restaurant named Alfies.

There was a ton of food, especially since there were 12 people to feed! Afterwards, my dad (who’s philosophy is ‘Eat Dessert First’) suggested dessert. We got three to split!

Afterwards, it was time for the beach. The last time we had taken E to the beach was a little over 2 years ago and he was terrified by water. You would have no idea now. He loved the water! A showed him (along with the cousins) how to boogie board and he was in Heaven. However, C did not have the same affinity for the water. The sand on the other hand was intriguing!

The entire trip we avoided C’s aids because of how she kept tugging at her ears. She was teething in addition to the upper respiratory yuck. E had a tough time with changes and COMPETITION with his cousin, who is the same age. I kept thinking all along how incredibly blessed we have been to have these three blessings. How we got to experience yet another trip with them and this time E really did well because he knew the routine of the airport. God is so very good!

Oh – and remember that one little thing? It was baby Motrin for C, in case she needed it. Which she did. Unfortunately, at 2 am I got to be the one heading out to the store to find some because Hubs had forgotten on his multiple trips to the store.

Have you gone on any amazing trips? Do you put it off because you have kids?