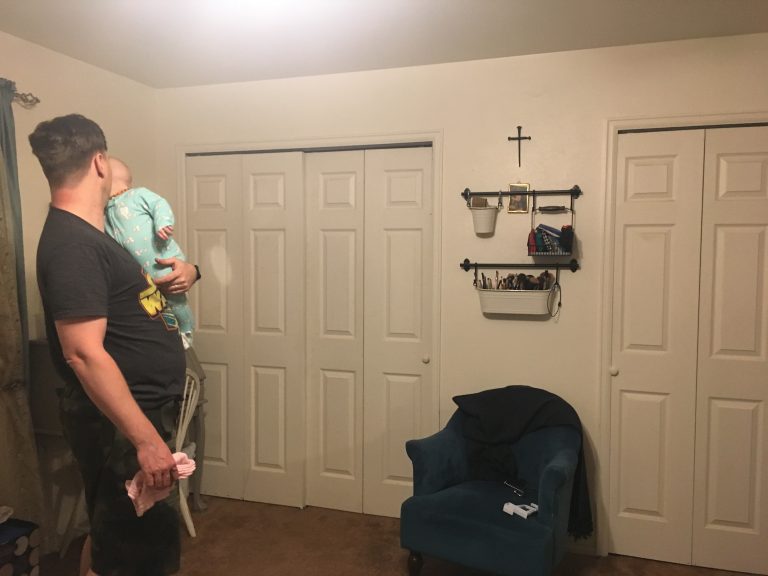 Get rid of EVERYTHING!

I’m a Type A, love knowing everything, Control Freak. We have been in this house for a little over three years. Before moving in, I donated and sold a ton of things. When we moved in, I made a pile of boxes of things I decided I did not need and donated again via a Fill a Truck event. It became a thing after that, every year, I would PURGE. My house still felt full and too difficult to clean.

I began working outside of the home again. It was impossible! So I hired a maid. I loved her, but it didn’t fix the underlying issue. She would literally come in and clear the surfaces of my house, filling up one of my laundry baskets with everything I had just lying around. I was too over the top between ABA, OT, Medchecks, Prescription Refills, Sports, Work and trying to figure out how to just exist to really even care. It can be tough being a mom and my hats off to every mom, because sanity takes a back burner so very often. I left a laundry basket under my computer desk for well over a year, just filled with STUFF. I did not have the head space to deal with it.

When I took a leave of absence because E was having such a difficult time with life, I couldn’t pay for a maid to come in every week or really every other week. So, I started trying to do little things to keep my home a bit neater. I went through that laundry basket and you know what? I really needed only like 3 things in there! By the time I found out I was pregnant with C, the maid was coming every month to do the deep cleaning, but I was slowly getting rid of things (mostly to make room for C’s presence in our lives). It was enough that difference became noticeable and I wasn’t scrambling to clean everything when somebody came over. It was good enough for that season of my life.

After C was diagnosed as Hard of Hearing, it was no longer enough. In the past three months, I have made countless trips to donation drop off points. All of a sudden, things were just that… THINGS. They cluttered my existence and I couldn’t handle it. I had no control over another child being diagnosed with something they would deal with forever. I needed to find somewhere to exert that control. Enter minimalism. Merriam-Webster defines minimalism as:

a style or technique (as in music, literature, or design) that is characterized by extreme spareness and simplicity

I stumbled across Purposeful Housewife via a Facebook mom group I’m in. I read so many of Allie’s posts that first day while I marathon nursed! It was what I had been looking for. I will never be that minimalist with only 100 possessions, but it was all about finding balance. So, I started with my clothing. Our family has so much laundry that I can never get it completely done before it starts back up again. Add to that cloth diapering and it makes life even tougher (but don’t get me wrong, I love to CD). The more life spun out with appointment after appointment getting us set up to meet C’s challenges head on, the more I purged.

I found myself daydreaming about having peace again, when I couldn’t even remember when the last time I felt peace was.  I packed up over 2/3 of my wardrobe and it took a big duffel and one of Thirty-One’s big bags. Driving home from a weekend trip I remember telling my mom about it. I was very excited to get home, pack up my clothes and see if I could live with significantly less. She was worried about me, she told me not to “make myself sick” about this new thing. I told her I wouldn’t, that I felt GOOD about this. I got home and packed it all up and about 45 days later, Hubs put everything in a bag for me (save one pair of LLR leggings that I had purchased while pregnant and wanted again) and we donated it all.

Drastic? Maybe. But all of a sudden laundry wasn’t such an issue (at least for me). Two months later, we’ve gone around several little areas and done this – a bookcase here, a cabinet there. I’m not pushing this on everyone, but Hubs has gotten on board too. Our room already feels so much bigger! And I miss none of the stuff. A has started embracing this cleaner, simpler lifestyle, too. It made me proud when she was offered some trinket of a toy because it was “free” and said “No thanks! My mom and I are trying to have less clutter in our lives.” The drastic difference is with E, he used to make terrible messes and then be so overwhelmed he couldn’t handle it. Then, he’d melt down. We haven’t had a melt down about him picking his items up in about six weeks and that is HUGE!

Do I have peace yet?

Yes and no. I have less stress. My bedroom is a place for peace. I go in and it takes me at most ten minutes to straighten it up. I love being in there and when I wake up I’m not hit with what I need to do before I even get out of bed.There is less furniture in there now because we donated so much that we were able to consolidate into just one dresser. A has done the same thing in her room in preparation for Middle School. The rest of our home has work to do, but one room of peace is a good place to start.

This is just a way I’ve been dealing with everything. I recognize that there may be a multitude of other ways, but for me… It works. We (and I really mean me) are no longer spending all day every day cleaning. Which is good because on the days with 4 appointments that is what slides and on the days with no appointments my kids get more time.

What works for you? How do you find your peace?