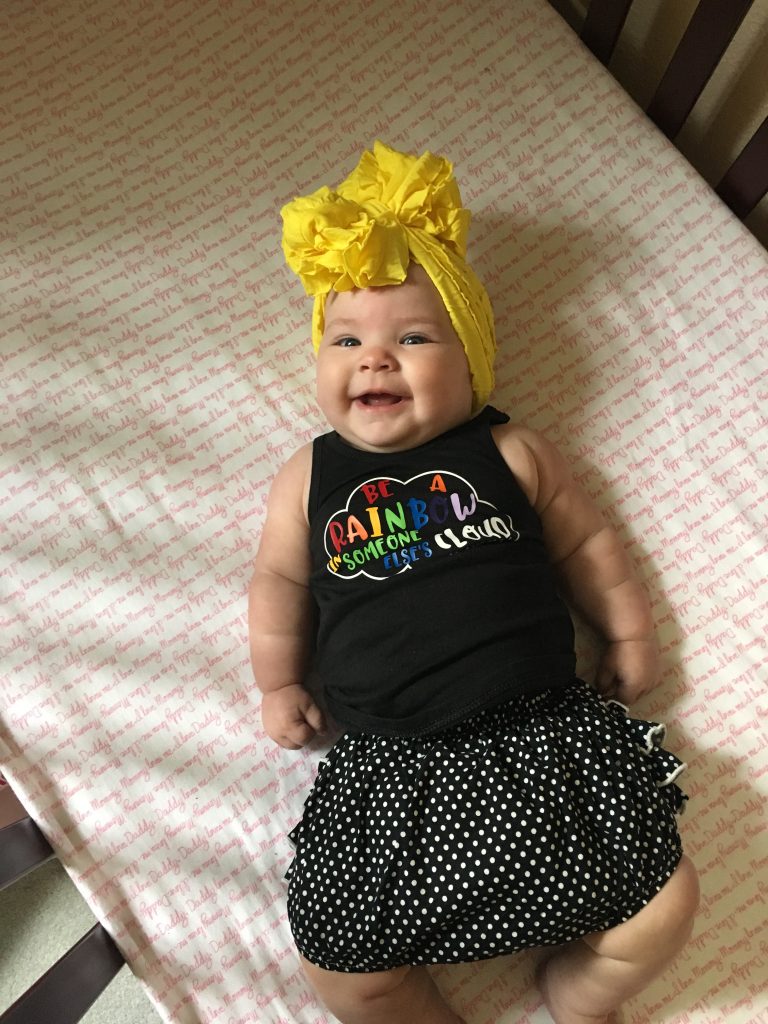 I’ve talked about the process for C being diagnosed as HoH. I guess now is the time to talk about what happened next.

In October, while I was pregnant, I flew to see my parents who were visiting L.A. During that time I was able to get acquainted with a cousin who is about 16 years older than me. She has a daughter who was born with hearing issues and when my parents heard this they were quick to bring up that our shared grandmother was Deaf. My cousin quickly said that her daughter did not have a genetic reason for her hearing loss, but instead it was due to an illness she experienced in her third trimester. Being pregnant, that stuck with me. I could get sick while pregnant and my baby could be deaf as a result? Scary stuff.

Then, I got home and my doctor had my twenty week ultrasound done. This is known as the “anatomy scan” but in reality, it is an ultrasound that measures the baby’s body and makes sure that baby is healthy and has no abnormalities which would be cause for concern. As it turned out, C had a cyst on her brain. It was a recognized marker for Trisomy 18, and because of that and the fact that C was being a bit of a butt and would not unclinch her fists it was suggested that we do a blood test to be sure. We are pro-life. We would not and could not make a decision about termination however, Trisomy 18 is often a reason to plan for palliative care or end of life care (think Hospice) from birth. So, we went ahead with the test. Those two weeks were excruciating. As in, Hubs was consistent – this is our perfect miracle rainbow baby and nothing whatsoever could be wrong with her – while I was terrified that something was going to end our dream of adding to our family. When the test came back negative and we knew our little girl just had a cyst we thought that our roller coaster was over.

After C was diagnosed I asked, “Why?”. I immediately thought back to my cousin saying that she had become ill in her third trimester with what she thought was the flu or a bad cold. I had become ill at about 32 weeks and was miserably sick. The doctor and her nurses were concerned with how low my blood pressure was and I could not do anything. Just moving from our bedroom to our family room exhausted me. I asked if that could in any way be a concern. She told me to go immediately and have C tested for CMV. Unlike a lot of women, I knew what CMV was because my Napro doctor had given me a sheet when he confirmed my pregnancy. It included a warning about CMV and how important it is not to share utensils and cups with children because the baby is at risk.

We went to C’s pediatrician and asked for the test to be ordered. She was fantastic and ordered it that day. I was told I should get a call from the lab and could go in. I waited a day or two, then called the lab, who said they hadn’t received the order. So I called the doc, she refaxed it. Meanwhile… I’m freaking out… You see, there is an antiviral that babies’ can receive in a limited window and we were swiftly approaching the end of that. I kept going until we ended up going in for a test at Children’s. They drew blood – which I thought was weird and asked about – my understanding was a saliva test was needed.

The next week, May 23rd to be exact, I was back in the doc’s office for C’s 3 month check up. I was told that she did have CMV. I was very angry. Rocked. Shook. I blamed myself. I blamed A and E who had been told not to drink from my cup but would sneak sips of water rather than getting their own. I knew that a CMV diagnosis was really life altering for C. At least, everything I read had told me that.

As part of the intervention to help C, we had been connected with our local chapter of Hands and Voices. This is an organization that supports parent to parent interaction and help. We were basically given a “Senior” parent who then would guide us. I told them how scared I was. How I felt like I was behind the curve. That we needed that antiviral – or at least to get into a clinic and have a discussion about it. They went to work and texted me. They encouraged me to try to get into the Infectious Disease Clinic at Children’s and talk to an expert. Meanwhile, we were scheduling C’s MRI to be sure that there was no calcification on her brain and I was a wreck.

So, I went back to C’s doc and asked for a new referral. She happily gave it to me and then I bugged the Clinic until we got the appointment set (6 days before the MRI was scheduled). It was a big deal to get in before because C’s MRI would require 8 hours of fasting (for a 3.5 month old) and I knew it would be a tough day.

A and I drove into the city the morning of C’s appointment. Hubs had work and there was no way I was taking E into that mess. My stomach was in knots. I was honestly hoping that we would get some extra answers and maybe faster access to the antiviral. I had an 11 yo as my emotional support, and she had no idea that she was there for that, she had just decided it sounded like a fun day and she likes Children’s. The Physician’s Assistant walked into the room and asked a ton of history questions. She then examined C to check reflexes and for other issues. At the end of the exam I hear, “I don’t think C has CMV and here’s why…”

The PA laid out all of the reasons she suspected we had a false diagnosis. She then explained that even if it was CMV, it was too late for the antiviral. She said that she wanted to do a rapid culture of C’s saliva and then a 14 day culture to be sure. I was dumbfounded and afraid to be relieved. Hubs had steadily held on through our pregnancy and even the CMV diagnosis that she was our perfect rainbow. Our miracle.

And he was right.

C doesn’t have CMV. We still don’t know why she is Hard of Hearing. Maybe we will find out in November. Maybe not. Here’s what I have learned.

So, no, it wasn’t CMV and I thank God. This is a preventable illness. Wash your hands, don’t share your toddlers utencils. Don’t share cups.